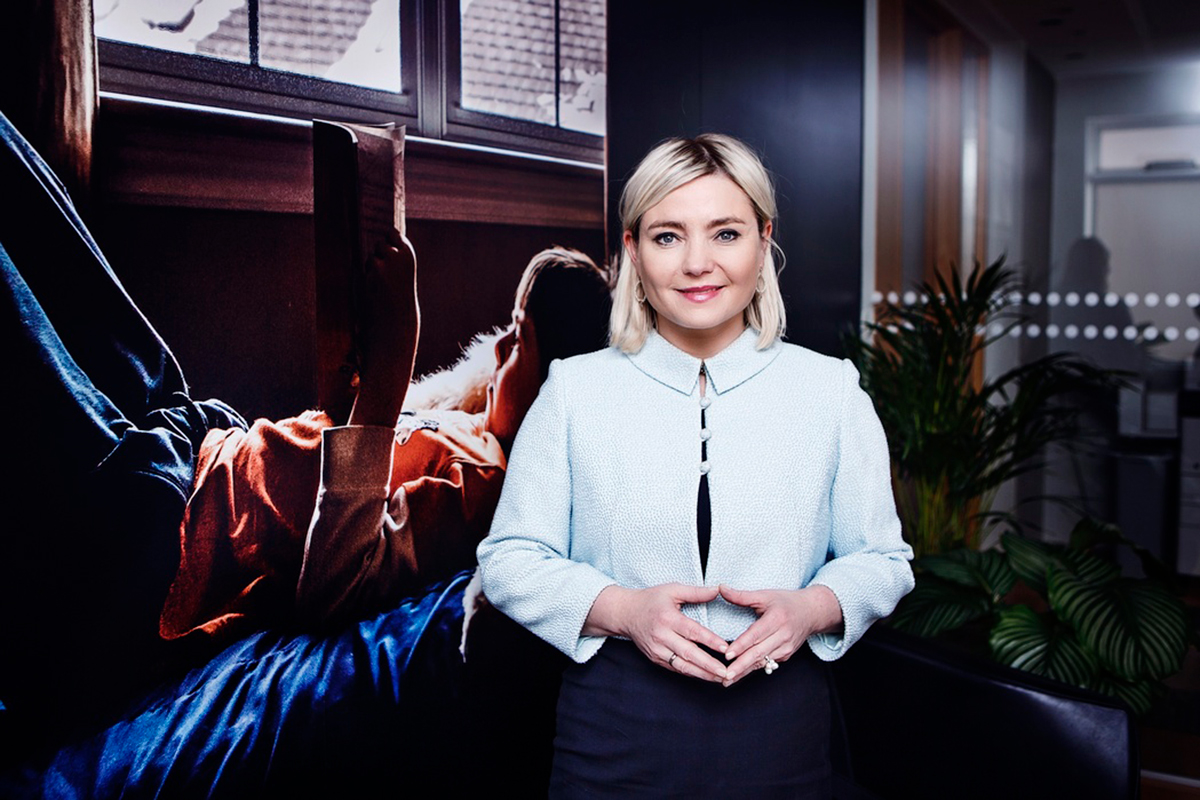 Posted at 16:27h in interview by admin

Lilja D. Alfreðsdóttir, Minister of Education, Science and Culture, clarifies why schools stayed open during the pandemic and why Iceland continues to focus on education, innovation, research and sustainability

Prior to your move into politics, you served as the deputy director for the generalsecretariat of the Central Bank of Iceland and were an advisor to the International Monetary Fund(IMF). Some of these years overlapped with Iceland’s financial meltdown triggered by the 2008 global debt crisis. To what extend has this 2008 crisis management experience and recovery helped in today’s situation?

Before entering politics in 2016, I used to be an economist and deputy director at the central bank and also worked at the IMF as the country representative. I worked at the central bank until 2016 and I was one of the strategists involved in the economic recovery of Iceland in 2008. During the 2008 financial crisis our priority was to protect the sovereign rating because once the sovereign is in default, it is extremely difficult to come back and to raise funds. This was the strategy since 2007 and until we liberalized the capital account. In a similar way, in this COVID-19 crisis, our priority was on healthcare. I believe you first have to take care of the sanitary crisis, and then you can have your community running.

We knew that in order to keep our healthcare system up and running we needed to have our school system working. I had very strong relations with the Minister of Health and the chief epidemiologist of Iceland, and I’ve been in close contact with them during the epidemic. We knew that children were less likely to be infected by the virus and were less likely to be contagious. Having this kind of clear factual information helped me to manage the school system with the best information—the same thing as we did during the financial crisis in 2008 when I worked with the best experts in sovereign debt crisis. All schools in Iceland were up and running during the crisis. Of course, they had certain limitations but they were never closed and adapted to distance-learning overnight, which is quite impressive. We have an amazing education system.

What strategic initiatives and programs have you been working on from your ministry to help cushion the socioeconomic impact of the crisis and speed economic recovery in your sectors?

We put a big share of emergency funds into the cultural sector, into sports, and into research and innovation. We have a big focus on research and development (R&D); this is a sector that we want to foster. We also foster our higher education and secondary education institutions. We have seen a significant increase in applications to schools and universities. One of our universities had a 33 percent increase in applications! We also approved a new student loan fund that supports students with up to 30 percent of the funds needed for their studies, provided they finish their degree under a certain time. This is an incentive for citizens to study again if they need to do so and this also aims to close the gap within our labor market.

In parallel, we have also increased our summer jobs for students though our innovation student fund. We are offering summer jobs for students and have increased our offer for vocational studying in the universities as well. We think this is very good for the community, as it gives some occupation to our youth during the summer. The employment level has always been really high in Iceland’s history and we are used to working hard.

For such a small island and population, Iceland packs a powerful punch when it comes to scientific innovation. 2.2 percent of gross domestic product (GDP) is spent on R&D, which is more than the European average, and one third of this comes from universities and public institutions. Wired magazine called Iceland the “world’s greatest genetic laboratory” and Reuters included 10 Icelanders among the world’s most influential scientific minds. Can you share with us Iceland’s overall R&D framework: what is your strategy to accelerate scientific research and innovation in Iceland?

When it comes to research and innovation, our approach is to propose rebates. These rebates focus on the private sector and we have increased them quite significantly. We have been working as well at the university level, creating an innovation fund and a technology fund. As a small and open economy, we need to focus on creating jobs around innovation. We have a relatively high level of education that has been increasing over the last 15 years; we didn’t use to have so many university graduates! That means that we also need to create jobs in that industry in line with the government schemes that we have been developing for the last few years. The pharmaceutical industry, genetics industry, the gaming industry are all very active in creating these jobs that add value to the economy. We have a very holistic vision here.

What kind of strategic partnerships have been forged to boost international scientific cooperation, particularly in this time of the precarious global healthcare situation?

We have quite significant global cooperations and we actively participate in a number of meetings. For instance, we are one of the leading nations in the Arctic Council. We have been promoting Arctic research and Arctic science for years now. Even with the COVID-19 situation, we still wanted to host the Arctic ministerial science meeting. We are always actively working with our partners.

I am a firm believer that Iceland can grow even further as a laboratory for genetic research, and for science and geology, which are significant sectors here, where we have a competitive advantage. Our genetic research is some of the best in the world. Looking at history, Iceland used to have one of the lowest GDPs in Europe before World War 2, but after the war we started to fully utilize our resource-based economy. We have built one of the most successful fishing industries in the world, which is completely self-sustainable. We have started to harness our energy, we developed our tourism quite substantially and now we are accelerating our innovation industry. These are all very strong pillars to our economy and to our export industry at the moment. During the financial crisis, Iceland scored a -150 percent International Investment Position, which was the same as Greece, but since then it has rebound to +25 percent today. We have been able to do this because we have always focused on having a positive balance of payments. Balance of payment and competitiveness have always been central focuses for us: we know that we need to be sustainable, to have a sustainable balance of payment, have a sustainable education system and so on. Sustainability is a key policy of the future.

Iceland has a lot to offer when it comes to sustainability and is a very positive example in that regard, starting with the way we harnessed our geothermal energy. I am very proud to say that we will export our knowledge when it comes to geothermal energy. Before that we were relying on coal energy, so we made a major shift in a relatively short time together with the municipalities and our researchers. In just about 40 years we became self-sufficient and sustainable with our energy.

Let’s talk a bit about your vision and plan to restructure and reboot Iceland’s education system by 2030. What are some of the key issues that need to be addressed and what are some of your propositions in that regard?

Icelandic universities are doing very well in international comparison and stand up very well against other international universities. They are focused on working closely with the labor market and around innovation. We are investing quite a bit in mixing the research done at the university level and at our high-tech companies. As an example, the University of Iceland is located next next to Decode genetics, where many future jobs are being developed.

How are you leveraging your networks and contacts cultivated during your tenure as Minister of Foreign Affairs to accelerate your universities’ internationalization, tighten relations with international academic institutions, and to favor student exchanges and alliances in research?

Science diplomacy is a very interesting area developing right now. In the future, we will see a much greater emphasis on this within nations, with lots more memorandums of understanding on education and science. Economic growth and innovation go at a par and are a result of enhanced cooperation between nations, between corporations, between education systems.

In this COVID-19 crisis, we could see that countries with the strongest infrastructure, the strongest healthcare system, the strongest education systems and the strongest communications were the best equipped to deal with the crisis. Human capital is our most important assert and countries that realize that are the one that will be the most competitive. That’s why I, as a politician, focus so much on preschools and elementary schools and on the whole academic system, because you need to have very strong human capital, and children and young people who are able to compete with the best.

As European economies are slowly exiting the peak of the healthcare crisis, the time has come to reflect on lessons learnt but also to focus on how to spark new activity and adapt our economies and societies the new normal. As a country that has always stood tall as an exception in Europe—from the way it has handled the crisis to its social model—how is Iceland setting an example at the moment?

During the COVID-19 crisis we prioritized healthcare as a central focus for the nation, but at the same time we realized that in order for our people and society to work, we would need to focus on key economic valuables, where we could develop incentives.

First we focused on consumption, and we proposed economic incentives for citizens to keep up consumption. Consumption grew throughout the period as a result. We also put mechanisms in place for the central bank to provide cheaper funding—our rates have never been so low as a result. Because we are highly developed country, we were able to use our banking system. Our banking system had been part of the problem in the previous crisis but this time around has become a part of the solution, helping small- and medium-size companies and citizens. Secondly, aside from consumption we also focused on investments, increasing public investments. We increased also government spending such as on health and education. We are very focused on having a balance in our exports and even managed to achieve a surplus during the crisis.

Do you have a final message for our readers?